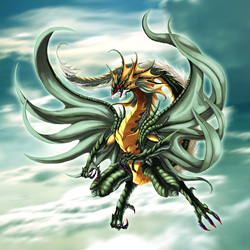 The Wind Clan prefer to soar the sky, weaving in and out around the clouds around them. The Wind Clan abhor fighting, and seek a peaceful treaty instead of full scale war.

Wind Clan Dragons have the unique ability to fly without first having to flap their wings, a trait given to them thanks to their master of Wind itself. This bonus means that during battle, they do not have to spend 1 turn to start flying, and can move immediately after beginning to fly.