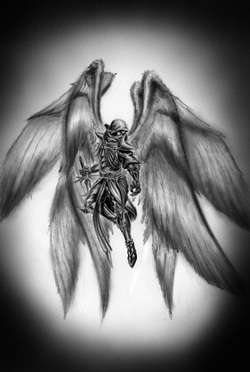 "You are impure. You and your 'empire' built upon the very blood an flesh of women sicken my very soul. You will die, slowly, by my hand, or even slower at the hand of my brothers. Take your pick."
-Grand Councilor Raphael, before the execution of Janus Tal'in, Firstborn of the Tal'in family.

The Exquitia are a name feared by many, and revered by some. Possessing the speed and strength of a Dragon, yet none of the morality, the Exquitia, when they see a wrong commited, the only sentence is death.

The Exquitia were the sole force behind the elimination of half of the Tal'in family, resulting in the almost complete overthrowing of the Human Kingdom. Because of the dangers that anarchy would cause to the world while the Twilight still existed and the addiction of most of the army of the humans to the Jillec Cheese, the Exquitia stayed their blades... for the time being.