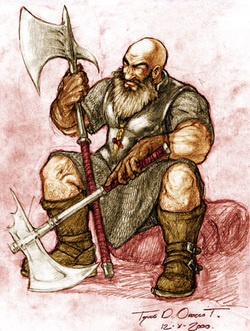 Dwarves who escaped the carnage of the Fall of the Dwarven Empire had a difficult choice; stay in the caves where the undead would get them, or go to the surface, where they had no experience and no way to get around.

Choosing possible death over certain death, the soon-to-be-named Surface Dwarves wandered the land of Lerai.  Gaining help from the Humans and Elves who used to trade with the Empire, the Surface dwarves founded a kingdom near the southern tip of the human lands, where they live to this day.