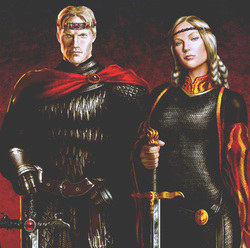 Supposedly created in the Old One's image in their laboratories, Humans are a race dedicated, at times, to greed. They can show great acts of kindness, but then take it away in an instant.

With their short lifespans, humans often die before they can do anything lasting in the world, but this is not the case at times, where human heroes have done things that would make an elf or dwarf gape in amazement.

The humans live south of the Belery River, just east of the Elvin Lands. They trade with the elves for supplies, and often times trade crafted items that can, at times, rival the ancient Dwarven Empire for beauty.

Most humans do not have the ability to wield magic, and those who do are viewed as "gene fodder" by many nobles, who wish to have children with the magical arts.

The Humans are based in a loose city-state government, with each city having a single representative in a Grand Council, guarded by Followers of the Way, a mysterious Order whose purpose has long since been forgotten. There are five city-states, and one central city where the Grand Council lives and rules from.

Atharil, City of Gold. trades with the elves for supplies and equipment. Richest of the six cities.
Milerai, City of Stone. Mines the ores used around the human lands for equipment and crafts.
Jeterl, City of Air. Humans of great knowledge come here to discuss ideas and plans for the kingdom. It is said that they even, at times, work with magic.
Hiiti, City of the Sea. The port of the humans, where they trade and prosper through the sea itself. It is said that, in the ancient times, two great serpents protected the city from harm; however no trace of them exist today and the story is widely believed as a myth.
Wllik, City of Warriors. The humans have always been a militaristic race, second only to the dwarves. This city is quite literally a fortress, housing the entire army of the humans.
Nirilac, City of the Gods. Supposedly the location where the first humans set foot on the earth after their creation by the Old Ones, this city is situated atop a massive mountain, with the Grand Council Chambers on the top of the mountain peak.