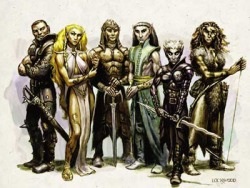 Majestic and ancient, elves are one of the oldest races in Lerai. They aided the Dragons in sealing the Old Ones, and use magic to it's best.

Elves are often known as snotty, and viewed as pompous fools by other races, and are sometimes scorned by travelers for their race's actions.

Elves live within the Elvish Lands, keeping to their kingdom and only interfering with the outside world when there is a dire emergency. Elves are also close friends to the Dragons, but their friendship has waned over the past five centuries.

Elves are separated into three castes; the Highborn, the Lowborn, and the Fae.

The Fae are elves with supernatural powers, able to warp the very fabric of reality when they mature. However, because of their ancestor's ancient pact with the Fairies of old, when they reach specific points in their life, judged by their magical powers, they enter a cocoon state, which absorbs the very essence of things it touches, and send out tendrils to draw magic from nearby objects.

When in cocoon state, the Fae is dormant, in a coma-like state until the metamorphosis is complete. When it is complete, the Fae's cocoon bursts open, to reveal them and their new fairy wings; the signature of a mature Fae. When a Fae grows in power, it is not uncommon for this to happen multiple times, with the oldest and wisest Fae having 5 pairs of wings.

The Highborn are the pinnacle of Elvin society, nobles, if you will, and the trademark high-bred pompous fools. Once in a while, however, a highborn appears that has feelings for people below his station, and when this occurs and the Highborn gains power, the Elvin Lands lie in a state of bliss. The fact remains, however, that Highborn will always be royalty, as Highborn have the blood of Whirin, who helped save the Great Dragon of Thunder's life centuries ago.

The Lowborn are the elves with little to no magical ability, and are born with little to no status.And are commoners in Elvin society. It is they that handle day to day activity on the kingdom. Lowborn, however, are gifted with one ability: The ability of skill. Most Lowborn are skilled with their job, and many of them have gained the status of Legendary, making beautiful crafts and items for the Highborn. When a Lowborn is deemed "worthy" by the Highborn, they are accepted into the High Citadel, the floating city of the elves, where they live their life in peace.

There are four major cities within the Elvin Lands: