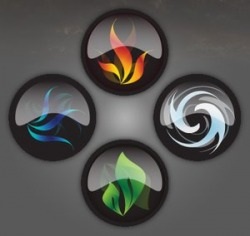 "Everything has it's nature, whether it is good or evil, dark or light."
-Great Dragon of Thunder, First Century A.S.

The Eight Elements are as follows, as well as a description for each.

Fire
Most common among casters who prefer the raw damage it can cause, Fire is the element of the sun. Casting spells of great heat and strength, Fire is an excellent choice for those who wish to have an offensive magical type.

Water
More passive than other elements, Water elementals use their powers more defensively, but there are still those who use ice and attack as well as any other element. A well rounded element suited for attack and defense both.

Wind
A gentle breeze or a raging tornado, either way Wind elementals are stubborn and headstrong. Using their powers to fly, heal light wounds and create windstorms around their enemies, Wind is a good support element.

Earth
Focusing on raw strength, Earth elementals use their powers to tear open the ground, shape it to their will, or strand their foes on massive pillars of earth. A good offensive element, almost as powerful as fire.

Light
Almost purely defensive, Light elementals focus on healing and support rather than offensive abilities. However, there have been a few cases where Light elementals have been on the front lines, most notably that of Geria the Fae, who used her powers over light to blind foes and then bring down holy judgement upon them.

Thunder
Arguably the most powerful of the elements, Thunder elementals can harness the power of storms and call them upon their enemies. Also, Thunder elementals command the most respect among their peers, as they have equally powerful defensive abilities when needed. However, Thunder is the hardest element to control, with those who fail frying themselves with the sheer power of the storms.
Effects: Damages you at Tier 1-4, the higher tier the less damage.