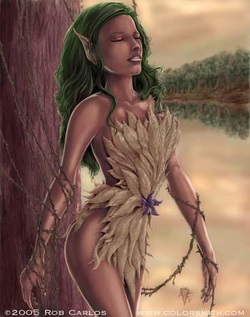 One of the newest races on the planet, but also one of the oldest, Dryads where one of the first races created by the Ancient Ones.

As the years passed, they found their numbers dwindling; the males died faster than the females, and the entire race was soon left with not a single male/

Dwindling until about 15 dryads remaining, Ysseyra, princess of the Fae came of age at the third decade of her life, she went, as customary bu the Fae, to wait for her suitor in a clearing named "Life."

Where other Drayds when they came of age failed to gather a suitor, Ysseyra believed that her fate would be the same.

However, the God of Balance did not see fit to allow the Dryads to perish. Ysseyra was discovered by the human Wanderer, Twil.

Ysseyra brought Twil back to her people, and after their "Union", the Dryad ritual that unites two people, they where mates.

Over the next year, the Dryad species was revitalized, and their peoples where saved from extinction, with Twil at their lead. The Dryads, thriving from the fact they could carry no less than five children within them at any one time, soon prospered and turned the entire southern edge of the continent to forest.

However, soon, the God of Balance, The Great Dragon of Thunder, came to visit the new Dryad empire. The insolence of Twil resulted in a curse among the Dryads; cursing then so that only 1 out of every thousand Dryads could give birth. This led to the creation of the Breeders; the remaining Dryads that could bear children, becoming property of the Dryad Queen, Ysseyra, and forced to bear children until the day they died, leading to a strict caste system to be formed.

During his reign,  Twl ordered a magnificent city to be built. This city was unique in that is was located completely within the Void, the Ether. The Druids of the Dryads spent many days chanting spells, and the result was the Dirillium Crystal; a power source so great that it rivaled the Great Dragon Crystals formed so long ago.

When Twil died, his soul was collected by the Great Dragon of Shadows and bright before the God of Balance himself. The day Twil rleased his mortal shackles, he became a God; the god of Fertility.