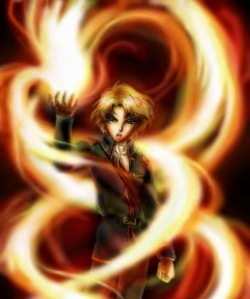 Magic in the Dragonfyre universe is actually classified into three types. Each has it's own weaknesses and strengths, and each are more powerful in some way.

Magic's three types are Spellweaving, the art of turning body movement into your element, Spellcasting, the art of using a spoken word to cast a spell, and Spellchanting, the ability to make a powerful, deadly chant that rains death and destruction down.

Magic is summoned from a person's very fabric of existence; their souls. the Soul Energy allows them to harness and control their element, which is chosen at birth, and use it as they see fit.

However, this great power cannot come without a cost. Each time you use magic, a part of your soul is torn from your body, leaving you weakened and powerless for a short time. Higher "Tier" magic users can lessen the time spent weakened, allowing them to cast many spells back to back, but the cost is still there; draining from the user's vitality and Soul Energy.

Of course, as all things in nature, your soul will eventually regenerate, allowing you to cast more spells, but magic still is a dangerous thing to use in combat.

Magic users are classified in "Tiers" which measure their ability. The higher the tier, the less damage they take from their own spells and the better they can control their element. Ingame, your first Tier is gained when you reach 5 Wisdom, and every 5 points thereafter is another Tier, leading to a max of Tier 20, the God Tier.

When being attacked by enemy magic, several things come into play. The first thing is your Wisdom, which is your Magical Resistance. For every 2 points of Wisdom, you have a 1 Point MR.

The second thing is your element, and the opposing element. If your element is the same as your opponent's, both of you take less damage, with your Spell Tier dictating the amount reduced. For every Tier, you gain a 5% resistance to your element, with Tier 20 being complete immunity from your own element. With your opposite Element, such as Fire and Water or Wind and Earth, you take DOUBLE damage from being hit with a spell, reduced from your spell tier by 5%, until, at Tier 20, you take normal damage from elements opposite to yours. The only element that is immune to this is Thunder, which has no opposite.