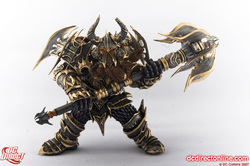 Zombieslayers. Undead's Demise. Imperial Soldiers have been called many things, and no one doubts their ferocity.

When the Imperial City fell, the Imperial Army led the evacuation to the caves, slaying every skeleton in their path. Many of the Soldiers fell, but for each one that fell, a dwarf would pick up their gear and take his place. To be an Imperial Soldier is a merit of highest honor among the dwarves, and to die with a weapon in your hands against the undead is the most honorable death a dwarf could wish for.