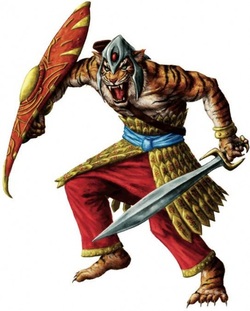 While their true names are the "Jillecai", Demons where so named by their ferocity in combat in the first Demon-Human war. While humanoid, Demons often have the build and features of an animal, most often the face of a tiger or a wolf.

Demons are naturally a passive race, prefering to live on their island on the Great Lake of Niledenia to the west of the human lands. However, the humans, looking for plunder and riches, attacked a small Jillecai city hoping to enslave them. The Jillecai fought back, leading to the first Demon-Human War.

Ever since then, the Jillecai have been at neutral ground with the humans, making sure to keep an eye on any travelers who pass through their land to avoid another war.

While Demons do have a humanoid appearance, they also retain magics from their ancient origins; they have the ability to transofrm into a four-footed beast at will, morphing their bodies to look like the beast they resemble.

There is only one city of the demons, located in the middle of Hilleri, the Demon Isle, surrounded on most sides by a small mountain range. This city is Kkiliri, or, translated into human language, Tranquility.