Dwarf of the Fallen Empire 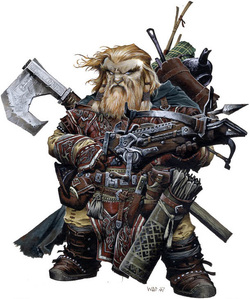 When the Dwarven Empire fell, many dwarves perished. However, some survived, fleeing to the caves that they helped carve, defending their last home from the undead scourge. Working to push the undead out of the Imperial City, they work tirelessly, training for the day that they would take back their ancient homes.

Dwarves from the Fallen Empire are always battle ready, having been raised in caves from which undead came, day after day, even when they where children. They learned how to use crossbows and axes well, and learned where to hit a skeleton with a mace or hammer to kill it the quickest.